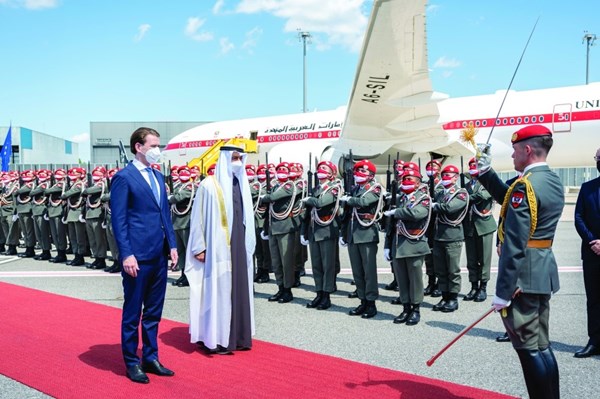 Ibrahim Salem Al Musharrakh, UAE Ambassador to the Republic of Austria, praised the distinguished bilateral relations in the fields of economy and trade, especially in the tourism and aviation sectors, on the occasion of the arrival of the first Etihad Airways flights to the capital Vienna, and Fly Dubai flights to Salzburg Airport, Austria’s second largest airport. .
Ambassador Al Musharrakh expressed his happiness with the remarkable positive development that the aviation sector witnessed recently between the two countries, which was reflected in the arrival of the flights of two national companies for the first time to the most important Austrian airports, which shows the growth of fruitful bilateral relations between the UAE and Austria, and the keenness of the leaderships of the two countries to strengthen these bilateral relations. excellent.
Al-Musharrekh pointed out the importance of the aviation sector’s contribution to strengthening the bilateral political, economic and commercial relations between the UAE and Austria, and enhancing cultural relations between the two friendly peoples.
Regarding the remarkable activity in the tourism movement between the two countries in light of the repercussions of the Covid-19 epidemic, Ambassador Al Musharrakh considered that the conduct of new flights by national carriers to Austria is a good sign of the recovery of travel and tourism between the two countries, pointing to the classification of the UAE as one of the main tourist destinations in the world, In light of the great efforts to revitalize the tourism sector and provide all factors to support the rapid recovery of the tourism and aviation sectors.
He praised the ability of national airlines to deal professionally with the changes and developments in the aviation sector resulting from the Corona epidemic. Al Musharrakh stressed the expected positive impact of Expo 2020 Dubai in enhancing the role of national carriers, and facilitating the travel of visitors, businessmen and government officials from Austria and Europe to the UAE, in a way that contributes to increasing travel and air transport between the two countries, and promoting the recovery of the aviation sector.