Microsoft had a crazy idea to put servers under water, and it worked 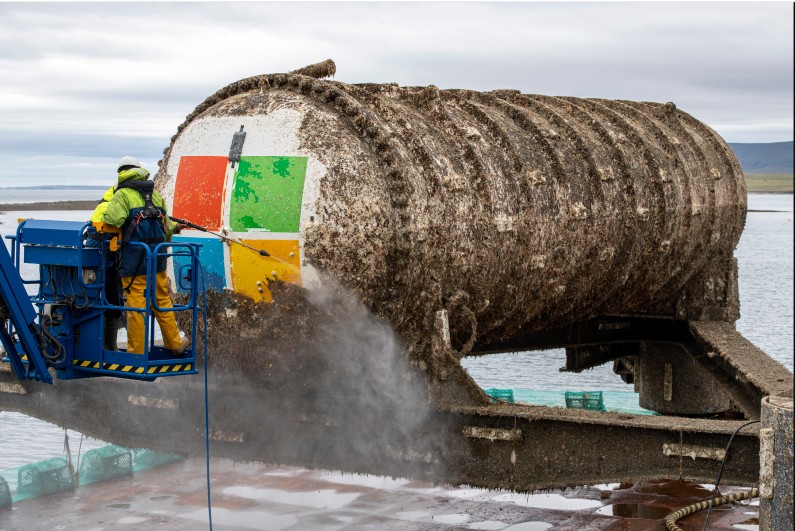 A little over two years ago, a shipping container-sized cylinder bearing Microsoft’s name and logo was lowered onto the ocean floor off the northern coast of Scotland. Inside were 864 servers, and their submersion was part of the second phase of the software giant’s Project Natick. Launched in 2015, the project’s purpose is to determine the feasibility of underwater data centres powered by offshore renewable energy.

A couple months ago, the deep-sea servers were brought back up to the surface so engineers could inspect them and evaluate how they’d performed while under water.

But wait—why were they there in the first place?

As bizarre as it seems to sink hundreds of servers into the ocean, there are actually several very good reasons to do so. According to the UN, about 40% of the world’s population lives within 60 miles of an ocean. As internet connectivity expands to cover most of the globe in the next few years, millions more people will come online, and a lot more servers will be needed to manage the increased demand and data they’ll generate.

In densely-populated cities real estate is expensive and can be hard to find. But know where there’s lots of cheap, empty space? At the bottom of the ocean. This locale also carries the added benefit of being really cold (depending where we’re talking, that is; if you’re looking off the coast of, say, Mumbai or Abu Dhabi, the waters are warmer).

Servers generate a lot of heat, and data centres use most of their electricity for cooling. Keeping not just the temperature but also the humidity level constant is important for optimal functioning of the servers; neither of these vary much 100 feet under water.

Finally, installing data centres on the ocean floor is, surprisingly, much faster than building them on land. Microsoft claims its server-holding cylinders will take less than 90 days to go from factory ship to operation, as compared to the average two years it takes to get a terrestrial data centre up and running.

Microsoft’s Special Projects team operated the underwater data centre for two years, and it took a full day to dredge it up and bring it to the surface. One of the first things researchers did was to insert test tubes into the container to take samples of the air inside; they’ll use it to try to determine how gases released from the equipment may have impacted the servers’ operating environment.

The container was filled with dry nitrogen upon deployment, which seems to have made for a much better environment than the oxygen that land-bound servers are normally surrounded by; the failure rate of the servers in the water was just one-eighth that of Microsoft’s typical rate for its servers on land. The team thinks the nitrogen atmosphere was helpful because it’s less corrosive than oxygen. The fact that no humans entered the container for the entirety of its operations helped, too (no moving around of components or having to turn on lights or adjust the temperature).

Get the Juice – the Mandarin’s  free daily newsletter delivered to your inbox.

You’ll also receive special offers from our partners. You can opt-out at any time.

Ben Cutler, a project manager in Microsoft’s Special Projects research group who leads Project Natick, believes the results of this phase of the project are sufficient to show that underwater data centres are worth pursuing. “We are now at the point of trying to harness what we have done as opposed to feeling the need to go and prove out some more,” he said.

Cutler envisions putting underwater data centres near offshore wind farms to power them sustainably. The data centres of the future will require less human involvement, instead being managed and run primarily by technologies like robotics and AI. In this kind of “lights-out” datacenter, the servers would be swapped out about once every five years, with any that fail before then being taken offline.

The final step in this phase of Project Natick is to recycle all the components used for the underwater data centre, including the steel pressure vessel, heat exchangers, and the servers themselves — and restoring the sea bed where the cylinder rested back to its original condition.

If Cutler’s optimism is a portent of things to come, it may not be long before the ocean floor is dotted with sustainable data centres to feed our ever-increasing reliance on our phones and the internet.