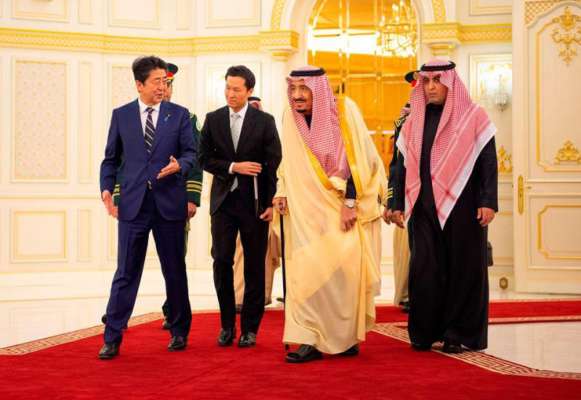 Riyadh : Japanese Prime Minister Shinzo Abe met the King of Saudi Arabia Salman bin Abdulaziz and other officials during his visit to the Kingdom to discuss cooperation between the two countries.

‘They reviewed bilateral relations between the two friendly countries and ways of enhancing and developing them,’ Efe news agency quoted the Saudi state-run SPA news as saying on Sunday. Both officials ‘also reviewed aspects of cooperation in accordance with the Saudi-Japanese Vision 2030’, it added. The meeting on Sunday addressed cooperation aspects in the fields of tourism, security supplies, artificial intelligence, and renewable energy, according to the SPA.

Earlier in the day, Abe met Saudi Foreign Minister Farhan Faisal bin Farhan Al Saud. They discussed the ‘bilateral relations and aspects of cooperation as well as the recent developments of the regional and international issues’, an official statement said. (IANS)

Disclaimer: This story is auto-aggregated by a computer program and has not been created or edited by Dailyhunt. Publisher: The Sentinel