A Man Flew Through Times Square on a Colossal Drone 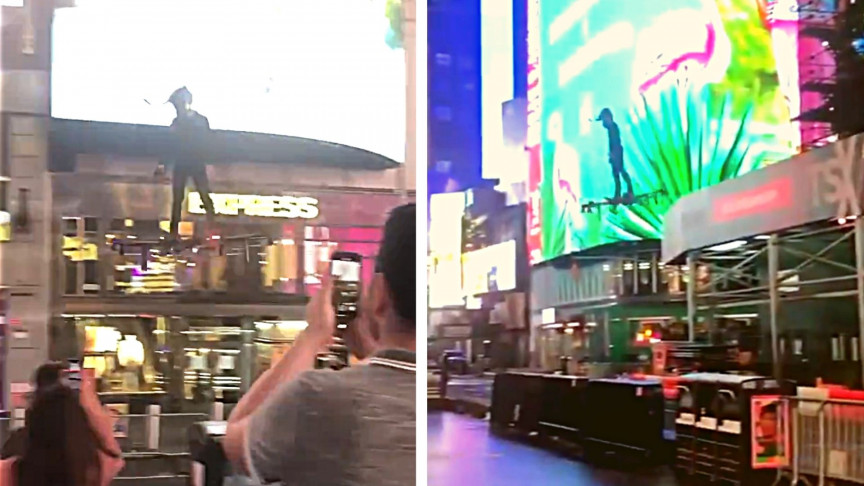 Skateboarding really took off this year. But what if your deck could fly? No, really.

There is a man flying around Times Square in New York City in a viral video on Twitter, riding what could be a colossal, eight-rotor drone, at roughly ten feet above the street.

This isn’t “Back to the Future,” but it feels close. While the video was shared publicly on the account owned by Rex Chapman, he notes in a tweet that he got the video from an Instagram account called molivefreeordie, under the name Morgan Nevins.

The scene in Times Square evokes memories of the Green Goblin from the 2002 film Spider-Man, played at the time by acclaimed actor Willem Dafoe. But unlike in the film, this flying person didn’t throw explosives throughout the city. Some will jump on this stunt as a hint of the future of personal transportation, but others will denounce the flying man as a danger to himself and others. We don’t know what the future holds, but we love to see it happening.

We can’t be sure when this happened, let alone the identity of the pilot, but this may not be the first time we’ve seen a flying man in public. In April 2020, another video of a man zooming through a city landscape on a comparably high-powered drone with eight propellers surfaced on the net. And there’s reason to suspect that a YouTube personality called Hunter Kowald performed the April flight, since supplemental videos of behind-the-scenes footage came out at roughly the same time as the April flights.

However, without confirmation, we can’t say for sure that the man who flew in Times Square is the same man from the YouTube videos. As for the “hoverboard” itself, it may have come from the company Omni Hoverboards, and might cost up to $20,000. After all, there are promotional videos on Omni’s channel of people riding the company’s products over treelines, which have comparable heights to the recent Times Square flyer video.

Of course, drones aren’t the only way to hit the sky without a vehicle. Last year, the first video recordings of “jetpack man” were captured, including promotional videos of the original mystery flyer and his friend soaring over Dubai, parallel to an Emirates Airbus A380 aircraft, at an altitude of 4,000 ft (1,219 m). But, sadly the original jetpack man, Vincent Reffert, died mid-training flight in the same city, at 36 years old.

We can’t speak to the safety of the man who flew through Times Square, but it’s not hard to learn to want to fly through New York, where traffic is often bumper-to-bumper, the trains are only on time when they’re late, and too many drivers are not friends to bicyclists. In other words, we’ll probably see the new drone-flying man again soon, and understand if you secretly hope he drops a spare colossally powerful drone outside your window. So you, too, may fly through the city.